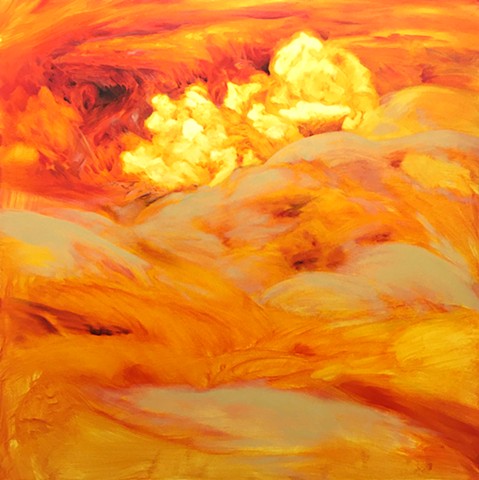 I heard somewhere that if you took the projected life of the Earth to be its lifetime, from its formation/birth to its death at the hands of a meteor or the death of the sun, sometime in the very distant future, that the length of its in-breath or outbreath would be about 75 years, roughly the lifespan of a human animal. We jump up out of this thing we call the earth, in-breath babies or outbreath babies, little conscious clay things swimming around the breathing surface until we fall back into it. Where do those thoughts go? Do they return to the Earth also? Collecting in massive black pools of pure mind deep in the earth? Digested there, absorbed and informing the Earth as a whole about its existence in a continuously expanding kaleidoscopic retrospective? Killers and killed, lovers and beloveds, conquerors, wanderers, addicts, saints all melding together into a truer, though never true, narrative? But we need names for all those other experiencers that return their bodies and minds to the Earth. What different kinds of tree experiences are there? What are the narrative arcs of butterflies and gorillas, caterpillars and sea urchins? Oh how deep those pools must be, and how little we partake of the strangeness that is there.